CSGO surf is an interesting mode in which users can navigate maps by flying over concrete blocks. In this mode, you need to reach the very end or destroy the enemy. It all depends on the type of this mode. This mode is great for both training and enjoyment.

Starting to ride on concrete blocks is much more difficult than it might seem at first glance. For this, the user, at a minimum, needs to learn how to keep balance, riding in the very middle of each block. Along with this, you need to maneuver the computer mouse, moving it in such a way that the player gets a small increase in speed when cornering. These are the main subtleties that the user must adhere to if he wants to play in the mode of CSGO surf.

All riding on concrete blocks is inherently based on two factors – speed and strafes. It is about them that it is worth talking about in more detail.

To play in this mode, you definitely need to learn how to gain rapid speed when flying. This can be done with a computer mouse. The user must move it every time as if he wants to fly up. Then you need to lower the mouse sharply down so that the user gets a slight acceleration. If you learn to keep this speed throughout the trip, then it will be easier for the player to pass even the most difficult map in surf mode. 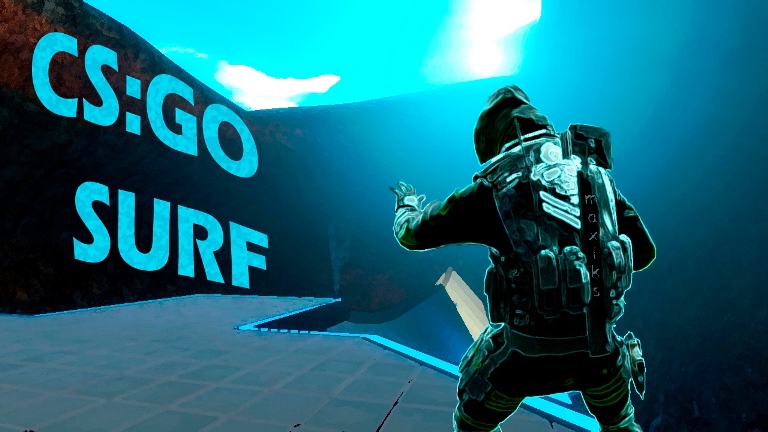 Also, when playing in surf mode, the user must definitely pay attention to strafes. Strafes themselves represent the movement of the player to the left and right. What could be unusual here? The bottom line is that it is with the help of strafe that the player must maintain balance on concrete blocks, taking off smoothly up and down. It just sounds easy, but in reality, it can be a problem even for experienced players.

It is worth noting that they can be trained even on a local server. It is enough for the user to quickly use the A and D keys. Such strafes can be useful not only in surf mode but also in a competitive match. With strafe, the player can get useful information by quickly peeking out from behind a wall. It is also necessary to watch training videos on Youtube so that the user understands in more detail what exactly is being discussed.

Surf is a fairly versatile game mode. In search of the best game server, the user may encounter additional modifications to the surf mode. In total, there are three main types of surf in the open spaces of Counter Strike Global Offensive:

Which of these modes is the best – only the user will determine. All of them are worthy of attention and each of them is definitely worth a try. The user will definitely not be disappointed.

How to learn to surf correctly?

The main mistake of novice surfers is the desire to go through complex maps with difficult textures the first time. It would be more correct to first practice on simple maps, and then gradually increase their complexity. Newbies should definitely try out locations like surf_utopia and surf_mesa.

So, here you are standing in front of the ramp and going to jump. To begin with, it is important to know that it does not matter which side of the texture you are surfing from – in this case, only the direction of mouse movement and the required key change. After the jump, we press against the ramp and hold the “A” or “D” button.

The most important indicator while surfing is your speed. It doesn’t make sense to move slowly over surfaces, as you simply won’t be able to jump from one texture to another. That is why the first task at the beginning of surfing is to gain the necessary speed. Usually, surf servers have a built-in speedometer that will show you how fast you are currently moving. At first, it will be more convenient for you to navigate it.

The player gains speed by strafes and sliding down the ramp. That is why for the right surf you need to learn how to move on the surface so that the speed you gain always exceeds the speed you lose. Usually, the passage of each individual ramp consists of a smooth slide down and a well-timed strafe up and to the side to move to the next texture. This transition should be clear and precise, as any extra movement can seriously throw off your gained speed.

It’s also important to remember that the forward and back keys are useless during the surf itself, as you are technically in flight the whole time. In general, to hone your surfing skill, it is better to use as few buttons as possible. Avoid using “W” and “S” and make sure that you do not accidentally press the button to move in the opposite direction during the strafe. And most importantly – do not touch the upper and lower parts of the ramp, as most often they completely reset your speed.

These are the simplest tips for surfing, but you can only truly master this craft with experience. Movements in CS:GO work quite intuitively, so after a couple of hours of practice, you will already feel pretty good on surf servers. The main thing is not to quit after a couple of unsuccessful attempts, which you will definitely encounter.

Do you use surfing in matches?

Theoretically, surfing is not very useful in competitive matches, and CC players often think that playing on such servers entertains players, but certainly does not help them improve in the game. This is not entirely true. Yes, on maps from the main map pool you won’t be able to slide over textures in the same way as on locations specially sharpened for this, but surfing helps a lot in honing movements. With regular practice on surf servers, you will move more deliberately and clearly on the map, as surfing teaches that every extra move can be fatal.

Unfortunately, there are practically no positions on competitive maps where the ability to surf would really come in handy. One of the few places to slide is located on Overpass near point B. There, the player can slide a little from the short to the tunnel.

Once, surfing in this position even helped the team win a round. Against the Hellraisers, Forest (the top surfer among the pro players) managed to slide down the wall and immediately after that took two opponents with one shot. “I like to think that it was thanks to my ability to surf that I won this clutch,” the player later recalled.

We have explained the importance of movement in CS:GO and how a clear movement improves your game. Of course, shooting will always come to the fore in Counter-Strike, but the ability to move smartly during the round will definitely give you an advantage over your opponent.