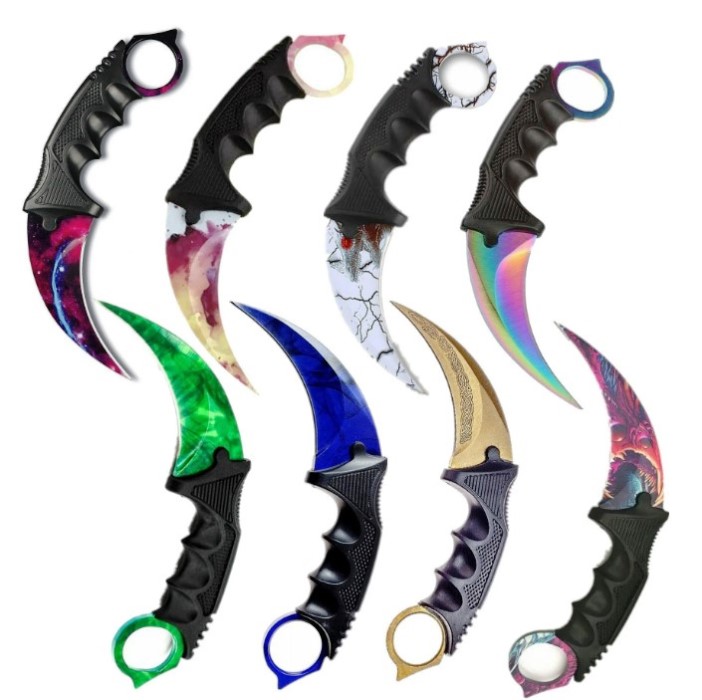 The internal elements of Counter-Strike are the most attractive among all Valve games. Skins are what most players play for and even use them to earn money. There are thousands of various items designed since 2013, and each update brings many new and unique ones. CS: GO knives have always been the most expensive items that each novice and proficient player desires. Players spend hours opening cases or finding offers on trading and reselling platforms for maximum profitable deals. So, let’s discover what knife skins are available in the game and what are the most famous.

There are 20 versions of CS: GO knives (including the standard for T and CT sides), and each appeared in the game with various updates.

Here, you can find the description for each:

The players have individual tastes, and each desires to get a specific skin for a CS: GO knife. The textures look impressive, so every design is valued by the community.

And now, let’s discover what designs for CS: GO knives players regard as the most beautiful and determine their purchase prices. The list is based on the number of purchases and lots in the Steam market, approximate popularity in matchmaking, and player reviews.

It’s a popular design added to the game with the Gamma Exposure update and quickly became one of the most desired knife items. The pattern is made of 3 colors – red, black, and white. The blade is made of steel, and its upper edge is painted bloody red; another bigger part is white (it also has 3 oval holes with mesh inserts). An interesting fact is that the knife’s battle-scarred condition makes it look darker than the factory-new quality. Its price is approximately $1,700-2,500.

It’s one of the most popular designs for knives that may look scary to somebody. The blade is covered with bloody red and has intertwining strands of cobwebs. With the Arms Deal update, the CS: GO knife was added to the game on August 14th, 2013. The handle and limiter are painted deep black, representing an inspiring color combination with red. With the quality decrease, scratches appear on the part of the upper blade, but it doesn’t influence its look significantly. The price for the skin is high and reaches $5,000-13,000 due to its rarity.

Its exceptional texture looks exciting and makes its owners admire it while playing the match. The knife was added to the game with the Seeing the Light update on March 13th, 2019. The blade and handle are covered with metallic paint and decorated with waves. The CS: GO knife’s primary colors include different shades of light blue that form an exciting sapphire pattern. Compared to other blades on the list, it’s price is lower – $500-600.

It’s one more knife added with the Seeing the Light update, and it became one of the most desired items in the game (can be dropped from the “Prisma” case. Both handle and blade are covered with red, blue, and yellow. The paint looks like puffs of smoke, making colors shimmer and forming a fade pattern. The CS: GO knife’s price is $400-500 on different markets and trading platforms.

The knife was introduced with the Take a Trip to the Jungle update on March 15th, 2017. The primary colors are yellow and light brown, and the pattern is decorated with dark stripes that look like the tiger’s skin. Players value such skin and set a high purchase price for it – $1,500-1,700.

Overall, there are different skins for CS: GO knives that millions of players desire to get. The designs are unique, and other games on Steam can’t provide similar opportunities to their users. Getting such items is possible by finding suitable market deals or trading with other players offering good things in return.