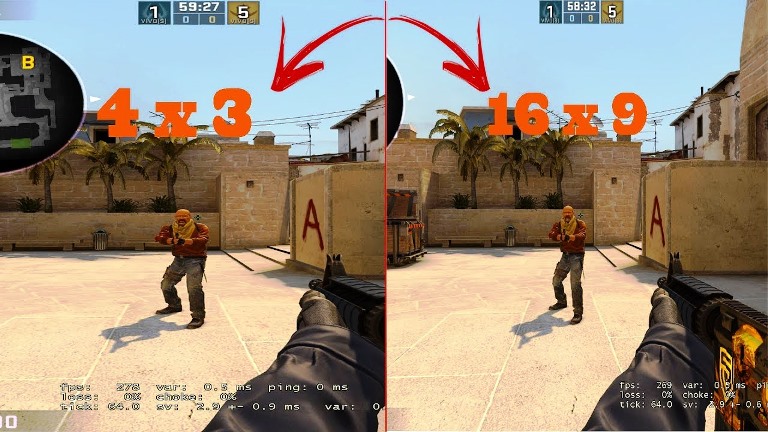 Every CS: GO player wants his game to be comfortable and have no inconveniences. Victory in matchmaking can be reached only with maximum concentration and having nothing that interrupts the playing process.

Except for installing the suitable settings such as mouse sensitivity, sound volume, and CS: GO resolution, the gamers usually reach it by:

Overall, the CS: GO resolution for the screen is a critical factor that influences convenient playing. It’s not only the combination of pixels but a basis of the gameplay and the match result. It affects the player’s perception of the image and determines if the textures are drawn. So, let’s discover its most popular sizes and understand their pros and cons.

What Resolutions do the Players Use?

CS: GO resolutions are essential, so establishing a comfortable image size should be provided right after installing the game. The most popular sizes are 16:9 and 4:3, each with advantages and disadvantages. And now, it’s time to discover them.

It doesn’t modify the image and is a default size everyone gets after the game installation. Practice shows that new players often stay on it and don’t change it for another. The biggest hurdle to playing at 16:9 CS: GO resolution for many users is the inability to deliver high FPS. But nowadays, computers with high performance have become more affordable, and the popularity of such a widescreen resolution is growing. The most popular ratio for it is 1920 x 1080 (the native monitor’s ratio).

The advantages of playing on 16:9 are the following:

However, such a resolution may have several cons that make the game uncomfortable for somebody:

Overall, such a screen size remains the most widely used by gamers because of the superiority of advantages over disadvantages.

There are 2 options for using this screen ratio: with black stripes and without. With 4:3, the image is stretched to full screen, and the field of view (FOV) will be smaller. Such CS: GO resolution is used by the pro players, who primarily think about comfortable playing, not the graphics. However, there are many disputes about the efficiency of its use.

So, the apparent advantages are the following:

But the objective cons make ordinary CS: GO players choose 16:9. The disadvantages are the following:

Overall, the extended image may not be efficient for playing due to the possible inconveniences it may provide.

So, let’s analyze the features of 2 most popular CS: GO resolutions and draw a logical conclusion.

As we see, 16:9 is more comfortable for playing and provides minimum inconveniences for concentration on the game.

What do Sportsmen Say?

Many professional CS: GO players play at 4:3 because most started their careers with games where such a ratio was the priority. In Counter-Strike 1.6, which was pegged to 4:3, there was an opposite clipping effect – using 16:9 cut the top and bottom parts of the image without affecting the horizontal. So everyone used 4:3 and transferred their habits to CS: GO, making novice players start copying the settings of the sportsmen. Nicolai dev1ce Reedtz once spoke about such a question on his Twitter:

“Making changes to the settings can complicate the playing process, and the players may lose the game’s feel. However, that is not the point. Everyone should play on what is most convenient for him.”

Many pro gamers such as s1mple, ZywOo, dev1ce, coldzera, NiKo, electroNic, B1t, and others use 4:3 CS: GO resolution. However, ropz and many other professionals prefer playing at 16:9.

Choosing a comfortable CS: GO resolution is essential for better concentration on the game. The 16:9 ratio is considered better due to its apparent advantages, such as higher FOV, better motion accuracy, and absence of lags. However, everybody has specific preferences for the game settings – each player perceives the image on the screen differently. So, it’s necessary to understand the peculiarities of playing at both 16:9 and 4:3 and establish the most convenient ratio.