CS: GO transition to Source 2: what are the predictions? | CSGO-Top.com
Skip to content 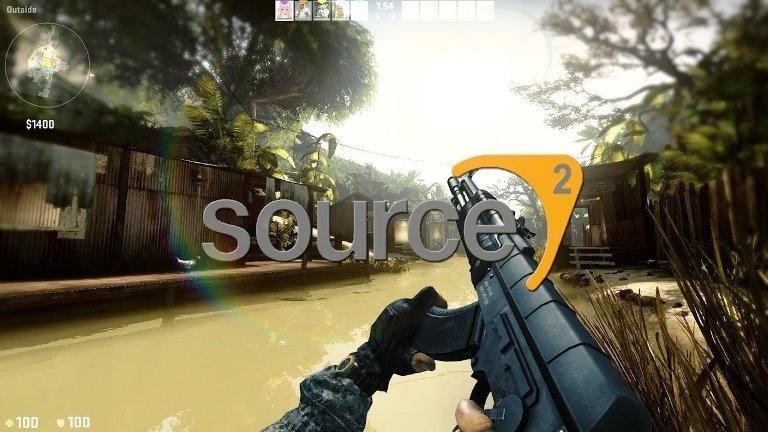 Counter-Strike is one of the most popular shooters in the world, played by millions of people. The developers release various add-ons and new versions to keep it exciting and improve the graphics. At the beginning of 2020, the public close to Valve, as well as many data miners digging up all the most secret resources of CS: GO, unanimously declared that the transition of the primary online shooter of our time to a new engine is almost a done deal. First, they promised the end of spring, then the beginning of August, and already in the last days of summer, they started talking about the fact that Valve itself had not yet decided on Source 2.

As we know, some games are already running with the Source 2 engine:

Why do players want this transition?

What is the problem? CS: GO is likely already too well known, studied, and popular. It is almost impossible to crank out an engine update in such a game without any negative consequences. Nobody doubts Valve’s technical capabilities and the best programmers work in the company, but how the engine update will affect eSports is still an unanswered question.

Even considering the existing bugs, CS: GO has the most stable network code, and to edit it to a large extent already means harming the game. Watch how carefully Gabe and the company make edits to the map pool. No more than one tournament map is in processing at the same time. Excessive activity can scare off players who are used to seeing CS: GO as a stable and predictable product.

However, Source 2 will undoubtedly be! It is a matter of time. This year or following, the developers will update the engine on the pain of the final obsolescence of the game. In this article, we will name the general expectations and decisions from the new engine. Whether these expectations will be somehow justified remains to be seen. But no one forbids us to hope for the best, right?

How will the graphics improve?

There are problems with smoke and fire in CS: GO now and then. Until recently, particles were rendered not by the server but by the player’s PC. As a result, the participants in the match could observe clouds of smoke from the same grenade differently. For some, for example, the smoke lay very tightly, leaving no gaps; for others, gaps were visible in the same place. The public forced this problem for a long time, as a result of which Valve moved the calculation of particles to the server. Now all players see the smoke the same way, in the form the server sends.

How will the animation change?

To be honest, about some in-game textures, one well-known reviewer could say: “Hmm, the textures are, of course, Paleozoic.” The game is already eight years old, and it is becoming increasingly difficult for Valve artists to maintain graphics at the proper level. Of course, the maps are constantly being improved, and so are the character models. But a graphic revolution without the intervention of Source 2 is not to be expected.

The implementation of the Source of vegetation deserves special mention. In short, it’s terrible. The grass looks flat and unnatural, and no one has ever seen lush foliage in CS: GO. This flaw is especially noticeable on the maps of the Danger Zone mode, most of which are open spaces with sand, soil, and the same miserable grass.

How will the cards change?

Rumor has it that Mirage will be the next card to be redone. Anubis or Cache can replace it in the tournament map pool. Reworking Mirage is associated not so much with the transition to Source 2 but with the natural obsolescence of the map. If it was actively played by many teams a few years ago, now it is one of the most unpopular in tournaments, and even Vertigo is gradually overtaking it. Cobblestone is worthy of redesign, which is now in an incomprehensible status: and not active and not spare.

From the new engine, we would like something more than new detailed textures (as happened with the redesigns of Dust 2 and Cache). For example, restoring the hostage mode from the ashes would be nice by improving the ancient Office and Assault. If Valve agrees that these maps are unnecessary, let them delete them. Why are there “dead souls” in the game?

The CS: GO toolkit is, in principle, an antediluvian thing. It applies to the demo player and the level editor, which has been the unchanged Hammer Editor since the game’s release. Of course, game editors have never been as convenient as specialized 3d modeling software. But from what a newcomer sees when he enters Hammer, it can bleed from his eyes.

The interface seems to be from 1998; management and navigation are as inconvenient as possible. To create an ordinary wall with a texture, you must climb around a bunch of windows and play “Flight of the Bumblebee” on the keyboard. For comparison, let’s take Unity or Unreal Engine, where any student can make and compile a location. After getting to know Hammer, I seem to understand why there are so few new maps in CS: GO and why Valve developers constantly take ready-made works posted on the Steam workshop. Yes, it is already sickening for them to delve into this hopelessly outdated editor!

The hypothetical Source 2 Editor should equal the above editors. And if, even now there are a huge number of custom maps for the game, imagine what a boom will happen with the release of a new toolkit. And the most interesting thing is that a full-fledged product has long existed that allows you to easily create levels, models, and scripts for Source games.

Do you notice anything strange?

Earlier, we spoke about possible improvements, but we will throw in a little skepticism this time.

How many examples have we already seen when a seemingly win-win action from developers, namely updating the engine and graphics in the game, led to negative consequences. The most indicative for me, as a lover of online shooters, is the example of the game Insurgency. The first part of it is based just on the Source. The developers had high hopes for the second part while promising that all the best in the game would remain practically untouched. The unreal engine became the engine for it, and what was the surprise of the creators when they realized that even a year after the release, almost no one plays the second part.

After all, with the engine, physics has changed, system requirements have increased, and the cost of the game has improved. Veterans preferred to stay in the previous version. The developers do not lose heart and try to keep at least their audience: updates are released, and thematic events are regularly held. Seeing all this, it makes us sad to realize that by nature, we constantly want changes, but when they come to us, for some reason, we cling to the past and keep it in every possible way. Of course, Source 2 does not promise any catastrophe, but it may bring a few flies in the ointment to the sweet honey barrel of CS:GO.

How will performance change?

A problem that certainly cannot be avoided is an increase in system requirements, which means a decrease in the average fps. It’s no secret that many pro players play on low graphics settings. It allows you to get more frames per second and turn off or minimize unnecessary graphic details that can be distracting during important matches. So, perhaps after the transition to Source 2, everyone who has not had time to update the PC will have to play at lower settings. Based on the experience of playing maps recently added to CS: GO (Anubis, Swamp), one can see fps drops by 10-15 frames. The new maps are more detailed and complex in geometry, and there is no reason to believe that Source 2 will differ.

How will esports develop?

We already clearly see, as if in reality: the Natus Vincere team – the main hope of the CIS scene in CS: GO – is losing another tournament with a bang, after which they declare that it’s all to blame … Source 2, of course! Say, we prepared tactics and layouts in one game, and now we are playing in another. It takes another two or three years to retrain. Don’t be offended by Na’Vi fans; the team is mentioned here for artistic purposes only. Everyone can have problems adapting to a new engine.

Real oldies remember the “pit” that the competitive scene fell into with the release of CS: Source in 2004. Many continued to cut exclusively in 1.6, and the transfer to the new engine was called a dead end. In general, it turned out that way; CS: Source did not last long, and during its activity, it did not become more popular than 1.6 for tournament organizers. Global Offensive turned out to be the real salvation of the series, sheltering all the adherents from both CS: Source and 1.6. Despite the success of Half-Life 2, Counter-Strike: Source, released simultaneously with it, unexpectedly turned out to be a failure.

But CS: Source and CS: GO work on the same engine! Technically, they have fewer differences than CS: Source and 1.6. All these ups and downs make the release of a new engine an unpredictable phenomenon. Players are already too accustomed to CS: GO being the leader among competitive shooters; many have forgotten the failure of CS: Source and cannot even imagine that Valve is risking something. And Gabe, again, ponders every nuance, lounging in an armchair and stroking his gray beard.

Should we expect audience leakage?

A logical consequence of the previous two points. The CS: GO audience has continuously grown over the last few years. Plus, the game is free. Can something go wrong? Maybe, mainly because of the recent release of a direct competitor – Valorant from Riot Games. The confrontation with Riot is not new to Valve, and the same is happening in the MOBA scene, where Dota 2 competes in popularity with League Of Legends.

We don’t think that Valve is afraid of competition, but since 2012 it hasn’t faced it. All competitive session shooters that came out during this time were called “contra clones” and went to the trash without pity. Valorant is also a CS: GO clone, which is even a plus for Riot, because it is easier to lure people into a game with similar mechanics than into an innovative and incomprehensible one. Several professional e-sportsmen have already been retrained, and amateur players, seeing this, conclude that not everything in Valorant is so hopeless. Keeping in mind that you can jump there anytime, gamers will no longer cling to CS: GO as the only option. And there is no doubt that this causes concerns for Valve more than anything else.

As before, everything written below is just our opinion, but looking through the forums and chats of the players, we were convinced that it coincides with the thoughts of the majority. No one knows how the transfer of CS: GO to the new engine will occur. It is also unclear to anyone how significant and noticeable the changes will be. We will have to test all this only after the immediate update, which promises to be the largest in the game’s history.