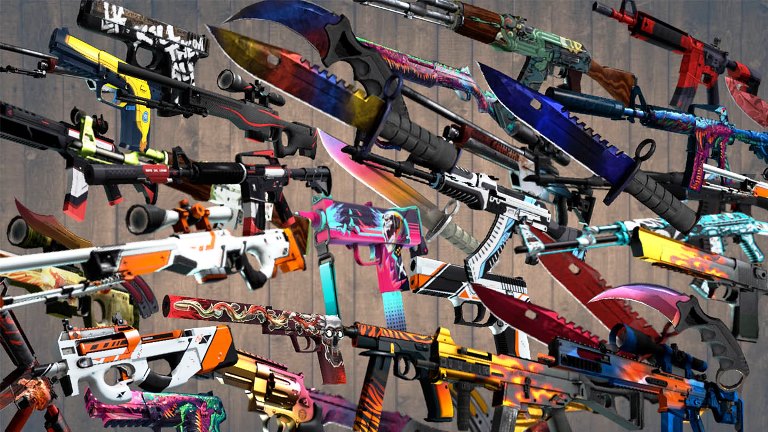 Every CS: GO player has received skins at least once, sold them, and bought himself something more or less beautiful. Many players deliberately invest in the game to buy beautiful skins. In this article, we will tell you how and where to buy cheap CS GO skins, while in the game they will look the most worthy.

Skins in CS:GO are divided into types according to rarity, cheap CS:GO skins can basically be found in any of these categories (From consumer goods to classified). It all depends on the condition of the skin (worn out or not), as well as on the category to which this skin belongs (regular, StatTrak, souvenir, etc.). The price for them ranges from a few cents to $1 and more.

How to find cheap skins?

Finding cheap CS GO skins is not difficult, you can search by parameters (by setting the desired range, category, etc.) on the marketplace. However, you can search not only on the Steam marketplace, there are many trusted sites where you can buy skins.

When choosing cheap CS GO skins, you need to rely on your taste. Look at the review of the weapon you want to buy, and see how it looks in the game. If you like this weapon, buy it, enter the game and play. The main thing when choosing a cheap skin is to look at as many options as possible, as some sellers may overprice it.

Let’s start with pistols because it is with this weapon that appears in our hands at the beginning of the match. And they can be inexpensive. This list will not include weapons from the Arcane list.

A cheap skin in Minimal Wear quality starts at $0.70. The silencer, even at a cursory glance, catches the eye. Most likely, this USP was called a conductor because of its ability to escort enemies to the next world.

Also cheap and cool USP-S, and also often found in public. Even the top players. This weapon was not fired in one round, even when doing eco. “Twisted” as from “After field tests” starts at a cost of $0.80. It’s a thing.

The counter-terrorist character hates this Glock, especially if the very first shot is to the head. TOP Bunsen punches in the first round so that you remember him in the last. The starting price for a Bunsen Burner as “Factory Direct” starts from $0.51.

Cheap Moonlight Night fits perfectly in the hand and strains even the most notorious enemies. A good Skin looks decent even when compared to other weapons. The starting price with the quality “Straight from the factory” is $0.85.

With such a cheap Deagle at first glance, it’s not scary to go mid during a force round. You can say more: such a Deagle is frightening, but not afraid. As “Worn”, but in excellent appearance, it will cost from $0.75, but it’s clearly worth it.

If you like to go to mid from the first second with this Deagle to shoot at mid against AVP, then the killed opponent will not even be ashamed of it. To die from a shot from the Blue Plywood is not ashamed, but even noble. Skin as “Direct from the factory” is regarded at $0.84.

The P250 requires special treatment, since handling this pistol often leads to wins (remember how ZywOo behaves with it. Just in the top). Such a cheap P250 with StatTrack and Factory New quality will cost you $0.69.

Any farm will be useful not only during the force round, but also in cases where you need a very urgent push with armor and flash drives and using weapons, but the player does not know how to shoot with the AK-47. With such a MAC-10 it’s nice to break in, you want to kill, but you get a lot of money. By the way, the quality is “Directly from the factory”, and even with StatTrak the gun will cost $0.63!

As we wrote above, farms bring only joy and happiness to all players. Especially if your teammate does 3 in one round with MP7, and in the next round he can drop WUAs. Such a skin with the “Factory New” quality will cost you $0.65.

TOP AK should win games when team spirit drops to 0. If you suddenly have Lost Land AK in your hands, then rest assured that opponents will definitely hit another land from your headshots. Such a cheap skin as “Worn” starts at a price of $0.66.

Almost every newcomer in 2018 had this cheap skin. It has been bought and sold so many times that the marketplace has lost count. Today, if you have an M4A1-S | Nitro, then you automatically become the owner of the old-school skill. The price for the quality “Worn” starts from $0.71. And this cool M4A1-S is still popular.

AUG became popular after it began to be actively taken on the pro scene. Remember electronic from NaVi, who takes on enemies in packs on Inferno in the big sands? Did you also want to? Cheap AUG Ricochet as “After field tests” with StatTrack costs from $0.42.

SG has also become popular recently but has already managed to win the love of many players. A little recoil, a scope, a lot of damage… Moreover, it’s a beautiful skin, although it’s a little more expensive than the previous ones. SG 553 Imminent danger with StatTrack and Factory New quality starts at $0.87.

Previously, in order to pick up such a weapon, the ability to shoot from it was required. Today, even a neglected LEM will run with a simple WUA. The owner of Phobos will not take a gun just like that. He takes her to victory. On the marketplace with Minimal Wear quality, this skin will cost you $0.77. Budget option with which you can assemble a set.

If you are thinking about buying the most beautiful skins in 2022 with the maximum benefit for yourself, then you can look towards sites that sell them at a discount or in bulk. No matter how it sounds and looks, for your $1-2, no one will cheat on the deal. Buy the best skins where the quantity beats the price down.