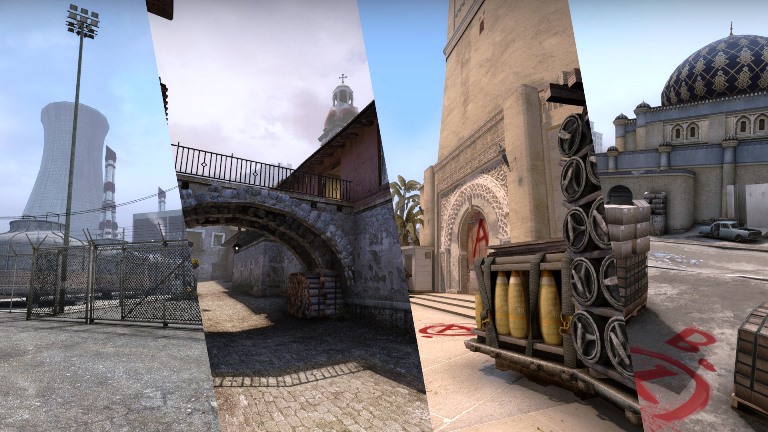 Counter-Strike is a game that brought players of different ages worldwide together and made them join exciting battles. The gamers meet each other while playing various modes such as competitive, classic, deathmatch, arms race, etc. Everybody prefers a specific gameplay type; usually, the in-game pastime isn’t limited by traditional matchmaking. Therefore, the developers created various CS: GO maps, and each suits the specific mode. So, let’s discover the most enjoyable maps in the game and understand their particular positions for terrorists and counter-terrorists.

CS: GO maps have different structures corresponding to the aim that players follow.

Therefore, there are several classifications depending on:

So, let’s discover what maps each type includes and their peculiarities.

Maps Depending on the Scenario

There are 5 standard game modes, and there is a specific number of CS: GO maps for each:

The most popular scenario is Bomb Defusal, the primary mode for matchmaking. It’s played on each CS: GO championship, and the maps are known to each player.

Maps Depending on Game Balance

Here, there are 2 primary types of CS: GO maps:

The players mainly prefer front-line maps because they are the priority for competitive matches and allow ranking up.

This type is provided for having fun and training shooting, or grenade spread skills, and the gamers play on them in custom lobbies. Such CS: GO maps are developed by ordinary community members who determine their gameplay and structure. The most popular maps are aim_allpistols_dust, aim_map, Home Invasion (cooperative gameplay), Prison (Hide and Seek), and others.

Most Popular Maps in CS: GO

So, let’s discover what CS: GO maps community loves the most and plays thousands of matches daily.

It’s a legendary Bomb Defusal map in the game. Due to the scenario, the location is Morocco. The map was updated multiple times to reach the balance for both sides. The most popular positions are Short, Long, Mid, Suicide, Tunnels, Pit, Green Box, etc. Dust 2 is a favorite map for Gambit and Astralis teams.

The location of the map is the country in the middle east. The plot tells that the terrorists aim to explode the embassy, and the CT side must stop them. The A and B plants are the well-defended positions, which can be reached by passing through Apartments, Palace, Catwalk, and Connector. The other places famous for 1v1 confrontations are Mid, Window, and Jungle. Natus Vincere, a famous esports team, prefers picking Mirage for matches in the championships.

The action takes place at a nuclear facility located in Germany. It has underground passages the terrorists use to reach the central storage they need to explode. Their preferable route to point B is the tunnel, and counter-terrorists do their best to defend it. The Radio Room and the Ramp are the most popular places for battles. This CS: GO map is the favorite for G2 and Vitality teams.

The Arms Race and Demolition modes can be played on this map. The confrontation occurs in the coastal port city of Saint-Marc, Haiti, deep in the Caribbean. Terrorists are trying to blow up a truck carrying chemical weapons. The exciting confrontations make it one of the favorite maps for War Games.

It’s the famous community map the players use to train shooting with AK-47 and M4A4. The gamers create a lobby and play 1v1 until one wins the necessary number of rounds. A lot of the map remakes were provided, but it remains the best to improve accurate shooting.

Overall, many CS: GO maps are classified depending on the scenario, balance for equal winning opportunities, and the origins. Dust 2 remains the most popular map through the ages, and it’s the priority for playing competitive matches. However, the most devoted Counter-Strike fans have played on each map and know all the positions and secrets of winning.