Cobblestone CS GO: will we see it again? | CSGO-Top.com
Skip to content 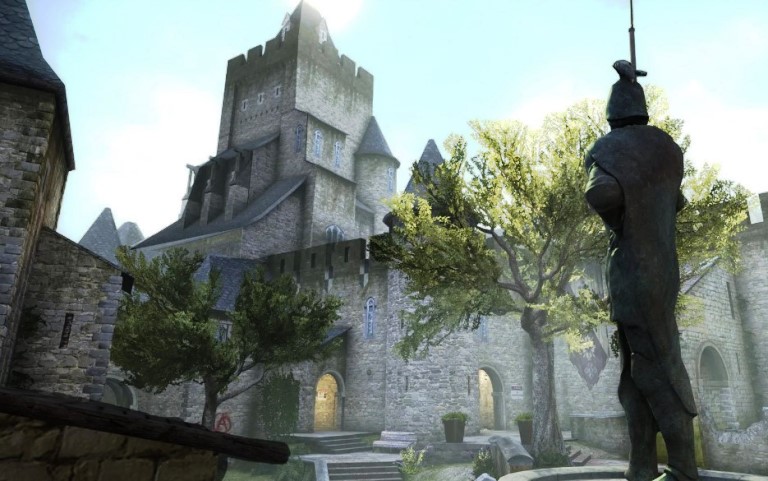 The Cobblestone CS GO map is one of the most mysterious in the entire Counter-Strike: Global Offensive series. The fact is that the action takes place in the medieval setting of France, presumably in the Castle of Lord William. It is noteworthy that this map is almost the largest in size.

The Cobblestone CS GO map is dominated by gray colors, accurately conveying the atmosphere of those times. The fight on the map takes place between the elite unit of terrorists “Phoenix” and special forces from the Intervention Group of the French National Gendarmerie. The main goal of the terrorists is to undermine the significant objects of the castle, which are of historical value for the whole of France. Well, now we suggest you familiarize yourself with the history and current fate of this map.

The birth of Cobblestone 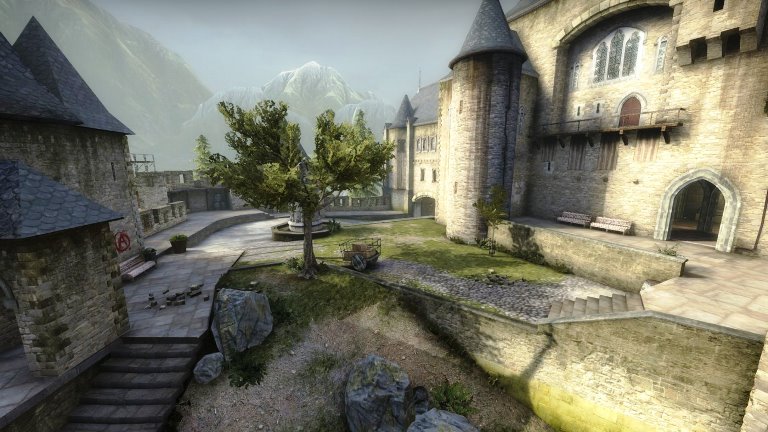 It’s been 22 years since Cobblestone saw the light of day. The maker is none other than David Johnston, who is also responsible for the creation of other legendary Counter-Strike maps – Dust and especially Dust2. Originally released in BETA 6.5 in the Winter Offensive update along with Aztec and Italy, it would take a few more revisions before Cobblestone could manifest its place in the CS world.

It quickly turned out that Cobble was much better suited to the competitive scene than Dust. The map enjoyed great popularity and was to be an integral part of the map pool for years to come. After visual updates in Counter-Strike: Source, it finally made its way – with a little delay – into Counter-Strike: Global Offensive, at that time with a significantly different B-spot. Remarkably, this map was included in the map pool of Operation Bravo.

After the map was added to the active map pool on July 1, 2014, it received a major update in February 2015. The back of the B-Spot has been closed, B-Lang has been significantly lengthened as access and the stair access to the dropper on the CT side has been removed, just to name a few of the changes. The map stays in this status in the map pool for over 4 years before it – supposedly only temporarily – has to close its doors. Today it is only playable in casual and wingman mode.

To date, the card is being processed, where it was sent back on April 20, 2018. In October of the same year, Cobblestone returned to the game’s map pool. That return was timed to Halloween since many elements of the map directly sent the player into the atmosphere of a mystical holiday.

It is also worth saying that there is no clarity on the further fate of the map. For a long time now, the card has been under processing, and we do not see any rumors related to its fate. In addition, with the appearance of Vertigo in the map pool, many players considered Cobblestone scrapped. And in official matches, this map was played much less frequently than all the others.

Well, we are smoothly moving towards getting to know the key points on the Cobblestone map.

Designations on the Cobblestone map 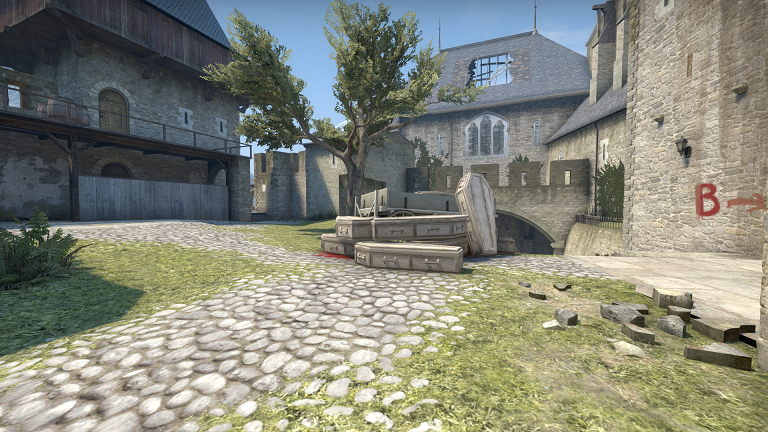 It is worth mentioning right away. Since there is no clear idea in what form the map will appear before the community after the update, the old Cobblestone building model will be taken as the basis. The map contains a lot of designations. You can always come up with your own position names when playing with friends. Well, for better interaction with each other, we recommend that you study the basics of positions on the Cobblestone map.

It’s been more than 3 years since Valve removed Cobblestone from the active CS:GO map pool on March 19, 2019, and announced a rework. But not much has happened since then. We look at the history of a legendary but lost Counter-Strike map.

October 2016, New York, USA: Around 8,500 spectators jump from their chairs at the Barclays Center as commentator Matthew “Sadokist” Trivett yells “What in god’s name is that from Snax” into the microphone. Janusz ‘Snax’ Andrzej Pogorzelski’s 1v4 vs. Natus Vincere in the ESL One New York 2016 final is one of the most iconic clutches in CS:GO history. The map: Cobblestone.

1,117 days – that’s how many days have passed since Cobblestone was removed from the active pool by Valve. The reasons given at the time were low popularity and calls for a rework. You can’t contradict that, but 3 years should be enough time to take care of these problems. Meanwhile, de_cobble has almost fallen into oblivion, and yet there are enough voices calling for the return of the Dragonlore map.

Cobble and the Pro scene 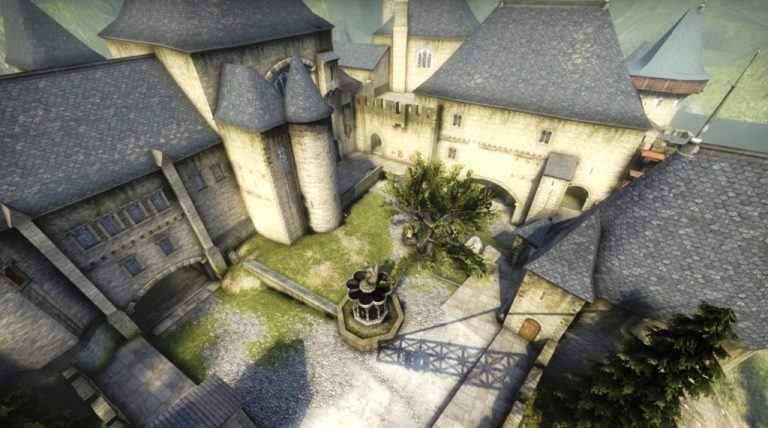 As with any map in Counter-Strike, there are plays in the case of Cobblestone that you still associate with the map even after a long time. It was part of the competitive scene for almost 20 years, including almost 5 years in CS: GO. The list of highlights is long, but we have picked out the most historical ones for you.

It’s still one of the most legendary CS moments to this day – when Abdisamad ‘SpawN’ Mohamed unboxed the Ninja Defuse at CPL Winter 2005 in SK Gaming’s gear. The attempt failed, but to this day, every time you watch, you hope that the ninja will bolt. SK later wins the tournament and SpawN immortalizes himself in this scene.

A good 9 years later, Cobble celebrates its own debut in the professional CS: GO scene. The map hasn’t been in the active map pool for more than a month when it plays its first major role at ESL One Cologne 2014. The ninjas in pajamas play the map in every knockout match and always win it on their way to the title. Adam ‘friberg’ Friberg’s prevented Bomb Plant against Cloud9 was also iconic.

This list could be continued indefinitely. It doesn’t matter whether it’s Janusz ‘Snax’ Andrzej Pogorzelski’ legendary pistol round against Na’Vi at ESL One New York 2016 or Kevin ‘keev’ Bartholomäus’ knife kill against the Immortals at PGL Major Krakow 2017.

Valve did not explain why Cobblestone was removed from the tournament maps, but it should be understood that there were no changes in it for a long time and therefore it was sent for revision and update. At the moment, there is no clarity in fate: it is still in the works. True, many players have long considered it decommissioned for recycling.

Cobblestone itself has undergone several changes after the last removal:

The changes added some new moves and forced the player to make a short pick, but in general, they did not affect anything in Cobblestone CS: GO. It is not clear when it will be returned, but Valve’s policy is quite transparent: add new maps instead of old ones due to the linearity of CS: GO as a whole. For example, Vertigo, which is still trying to be balanced so that there is no situation where 25 out of 30 rounds are played on one point. In fact, it is better to throw a new map to players who will test it and give feedback than to throw it at the mercy of globals or silvers.

As a result: the developers have been drowning a lot and will continue to drown for new maps: the same Vertigo, so there are extremely few chances for de_cbble to return. This can only happen if some location is removed and abandoned instead.

Even though Cobble has only been available in Wingman mode for over 3 years, there are enough views that want the map to make a comeback. From casual daddler to professional – if you want to know how big the desire to return is, you should check out the comments on Twitter posts from the official CS: GO account. Many fans regularly express their dissatisfaction with this, including popular streamers such as fELIXSAn.

The calls from the community are also supported by professionals like Marcelo ‘coldzera’ David or Dan ‘apEX’ Madesclaire, who long for a return. How realistic this is can only be speculated. Valve’s content fatigue around CS: GO is well known, even if the pace has at least increased in the last two years, especially with the release of operations.

Unfortunately, Cobblestone’s return is not in sight any time soon. Given the recent rumors of a new 10th-anniversary engine, Cobble may not be high on Valve’s priority list. Let’s hope that with a possible new engine there will be a whole series of reworks on the agenda.