Asiimov Skins: All About the Famous CS: GO Collection | CSGO-Top.com
Skip to content 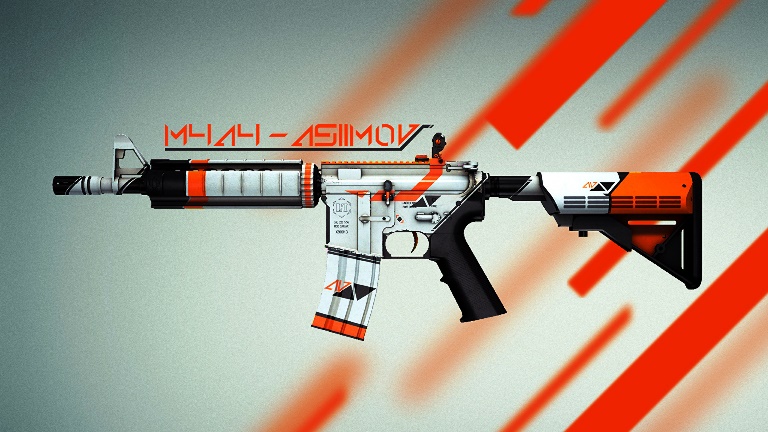 Many famous CS: GO skins have been popular for ages. When the developers add a unique and beautiful weapon design, the players unanimously choose it as the #1 for getting from the new case. And it happened in 2013 when the first M4A4 “Asiimov” was added to a “Winter Offensive” collection. It got the best reviews, and since that time, “Asiimov” has gained the highest popularity in the entire skin industry.

Nowadays, there are 5 Asiimov skins in CS: GO, and each’s dropped from a specific case.

The skins are provided for the following weapons:

With each new Asiimov skin, the players asked to add more because the pattern is universal and looks good on each rifle in CS: GO. So, let’s discover who created the famous design and understand the secret of its being trended.

What Are the Origins of the “Asiimov”?

The pattern was provided by Coridium, also known for such famous designs as “Neon Revolution,” “Atomic Alloy,” “Valence,” and others. The author is a fan of Isaac Asimov, the famous futuristic writer of the 20th century. Coridium created Asiimov skins to express his gratitude for his favorite literary works and increase the public’s interest in the famous writer. He described the design with the following words:

“I enjoy Isaac Asimov’s storytelling of what humanity will meet in the future. And to represent it with CS: GO skins, I used the colors found in most of his science-fiction works.”

As a result, Coridium reached the goal of giving birth to the first skin on December 18, 2013. Since then, the skin’s relevance has never decreased, and even the most beautiful modern drawings can’t replace Asiimov skins.

What is the “Asiimov” Pattern?

The primary colors are white, orange, and black, and their perfect combination makes the guns look like they were brought from the future. Asiimov skins’ basis is the geometric pattern – triangles, squares, parallelepipeds, rhombus, etc. Several figures complete more complicated design elements. All 5 skins are similar, except for P250 and AK-47, which have the pattern with the prevailing black. However, each weapon has a specific maximum float value, making several skins available in less than 5 values.

However, if there is no FN value for the weapon, it doesn’t mean it’ll look worse. For instance, the scratches and abrasions on the field-tested AWP make the skin look better and organically fit the general pattern.

Does Each Asiimov Weapon Have “Covert” Quality?

No, P250 “Asiimov” is classified (as pink-quality). The developers decided to make it classified because another skin, the M4A1-S “Chantico’s Fire,” acquired the covert quality in the Chroma 3 Collection. However, this fact doesn’t influence the skin’s relevance, and it also became a community’s “persecution object.”

What Cases to Open to get Asiimov?

The Asiimov skins were gradually added to CS: GO with further updates, and the community highly evaluated each. The weapons with the futuristic pattern quickly became the top-desired things for players. They instantly started looking for the most profitable price of the case’s key or trade offers to get them. So, let’s discover what collections contain famous skins.

The collection was released on December 18, 2013, and was the first one to include an Asiimov skin for M4A4. At that time, everyone didn’t even notice the presence of other good-looking skins such as AWP “Redline” or M4A1-S “Guardian” because the entire community was stunned by an innovative item. Nowadays, the Winter Offensive case is still popular for opening, and CS: GO platforms commonly install an affordable price of $2-2.5.

Phoenix is one of the best CS: GO operations, which made many players purchase a battle pass to get particular benefits. It was added on February 20, 2014, and during the first days, the players’ attention was paid to AWP “Asiimov,” the best skin for the sniper rifle. KennyS, the pro AWP player who calls a weapon “magic stick,” said it was the best design and used it on a pro scene.

The Breakout case was added on July 11, 2014, and included P90 “Asiimov.” The SMG is used less frequently than AWP or M4A4, so the skin has become less popular. However, it was inexpensive, cheaper than other Asiimov skins, which has become a primary reason for its purchase.

The collection, added on April 27, 2016, included many pretty skins, and P250 “Asiimov” was one of them. The players started opening Chroma 3 cases to get the pistol skin because of the wide use of P250 during the first round.

The case, released on December 6, 2018, included the last one of Asiimov skins for today. The community has been waiting for years to get a fantastic AK-47, and their dreams have come true. The pattern was available for review at the Community Workshop, and the design got the highest ratings.

What’s the Price for Asiimov?

The weapon’s vogue in matchmaking matches its price for Asiimov skin. Since 2014 when the first skin was added, the cost grew several times because the design’s rarity increased each year.

Nowadays, the items can be bought for the following prices (the cost is for the standard non-StatTrak type):

The most popular methods to get such skins are case opening platforms created by ordinary CS: GO community members. Several websites have custom Asiimov collections, including all 5 skin types. Such sets are unavailable if opening typical in-game boxes.

Overall, Asiimov designs don’t lose popularity through the ages and remain one of the best CS: GO designs. Coridium, the design’s creator, aimed to improve the skin industry by adding something new and futuristic, and he succeeded. Nowadays, practically every player knows about Asiimov skins and aims to get any of 5 by unpackaging cases or other popular methods.